Tips on using copay cards to lower your medical expenses.

Nothing is more stressful than opening a bill from the hospital and seeing that your life-saving infusion is going to cost $2,692 AFTER insurance—let’s just say it can cause a few gray hairs to come out of nowhere!

However, there is a downside—there are only two infusion centers in the state of Utah that currently provide Entyvio infusions and only one is covered by my insurance. The total for one infusion? $17,890.80. The average person on Entyvio requires eight infusions per year. That means over $143,126 in bills for one year for the average person on Entyvio. I hope you are making more money than I am, because there is no way the average person can come even close to affording $143,126 in hospital bills each year. Luckily, after insurance my bill is only $2,692.44 which isn’t horrible considering my max out-of-pocket is $9,000 for the year. $9,000 is still pretty steep, but it’s better than not having insurance.

What a lot of consumers don’t know is the majority of drug manufacturers provide financial assistance. For example, Entyvio offers Entvyio Connect, Entyvio’s Financial Assistance program, which limits caps the drug price to the consumer to only $5 per dose. My explanation of benefits from my insurance, which breaks down the hospital bill into line items and explains how much the insurance company will cover, shows that the pre-infusion medication of Benadryl and IV Steroid cost $139, IV Supplies cost $537, Laboratory Work $149.80, and Entyvio Drug expense of $17,065. My insurance covered all of the pre-infusion medication, laboratory work, majority of the Entyvio drug expense leaving me with a bill of $2,692.44.

Since I’m enrolled in the Entyvio Connect program my bill has been further reduced to just $5! That’s a savings of over 99% off my original bill with and without insurance. It really does a make difference using a co-pay card like the Entyvio Connect program to help lower your medical expenses. If you are taking a medication it is worth checking to see if the drug manufacturer offers a financial assistance program. These programs can help you save some serious money over the long-run.

Let me know your favorite ways to help lower your medical bills! Good luck and take care of your health!

Moving Forward–Reflecting on life with Crohn’s for eight years.

The devastation, shock, and confusion of being told you have an incurable, potentially life-threatening disease is hard to describe. It’s easy to feel as the world you once knew has collapsed around you. Multiply that feeling by 3x or 4x for each time you are diagnosed with another chronic disease and it’s easy to feel overwhelmed and powerless.

It’s been eight years since my initial diagnoses with Crohn’s Disease and Arthritis. Unfortunately, I had symptoms for many years before I was diagnosed, which lead to extensive damage to my digestive tract and body. Left untreated the disease in my body created a toxic-megacolon, a severe complication of IBD which causes the intestines to rapidly expand, while I was away on vacation. I had to be rescued by the Coast Guard off of a cruise ship, and spend three weeks in the Miami Children’s Hospital before being stable enough to fly home and spend three months recovering at Primary Children’s Hospital before being released. (More on this story in another blog post coming soon J)

During this time my life changed forever—I lost an extreme amount of weight, I developed severe avascular necrosis in my ankles due to heavy steroid usage, but more importantly I learned the road to remission is an ever-going battle and that positivity can make all of the difference in the world. Leaving the hospital, I looked and felt less than ideal, but I knew things could get better—and things did get better! 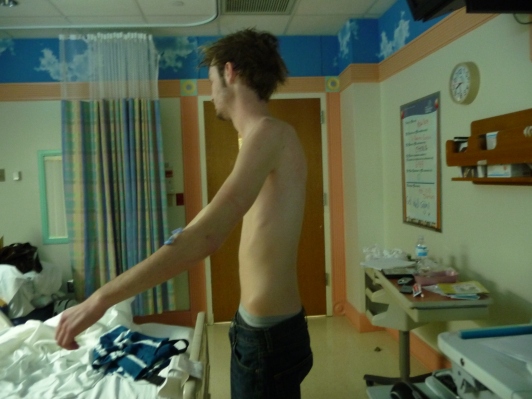 Severe weight loss due to IBD 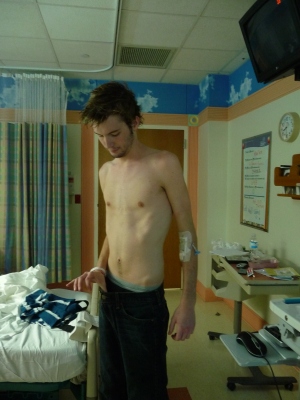 It’s been eight long years, but I’m so grateful to say that I live an almost ‘normal’ (no one has a normal life) life now. I’ve achieved remission in both Crohn’s Disease and Arthritis with the help of my amazing doctors and nurses. I’m able to work and contribute to society, I can travel wherever I want to, I can try new foods, and most important of all I can enjoy life.

I’m not saying it’s easy to live with chronic disease, but it is definitely worth it to keep a positive attitude and outlook on life. I know there will be some days where everything will just seem to go wrong. However, just keep on pushing and staying positive and hopefully before you know it, things will start improving slowly but surely.

It’s hard to believe how much your body can change in just a couple of years. Looking back it seems impossible that my body could be in the condition it is today. Don’t get discouraged in your fight against chronic disease. Keep believing and stay optimistic—you might be surprised by just how much it can really help! I hope everyone can keep moving forward in their fight against chronic disease and live as healthy and happy as possible!

What you probably see when you look at me is a normal, healthy 24 year-old. What you probably don’t see is someone living with multiple chronic diseases. When I was 16 years old I was diagnosed with Crohn’s Disease and Arthritis, and shortly after diagnosed with Avascular Necrosis. These conditions can be life-threatening and have a severe impact on quality of life.

While I’m lucky to currently be in remission from Crohn’s Disease and Arthritis (for the most part) and be able to manage my Avascular Necrosis symptoms, I used to be very, very ill. During this time I realized the majority of people could only see me from the outside, and couldn’t see the battle raging inside my body. Here’s what you didn’t know about life with multiple chronic diseases:

Every single day is a constant battle—even the smallest of tasks like getting out of bed become monumental obstacles! During a flare-up, your body is literally at war with itself, and your body pays the price. Getting ready, going to school, going to work, cooking dinner, etc., — normal tasks become impossible missions for people like me living with severe invisible illnesses.

Once you are somewhere like school or work, you’re beholden to the bathroom at your body’s will—you have no choice. The flare up causes severe pain that ravage your insides which makes it hard to focus on school and at work. It’s almost impossible to focus on any task which translates into poor performances. In addition, many medications can cause mental fogginess which makes it that much tougher to focus. Unless you have experienced it, you have no idea how hard it is to concentrate when your body is at war with itself. The next time someone at school or work tells you they have an invisible illness; you better give them some major props!

Your social life becomes almost non-existent. Going out and having fun with friends seems impossible. Not only does being sick make you tired and cranky, but many medications make you even more fatigued, grouchy, and even a little crazy. It’s common for people with invisible illnesses to be anemic which literally saps the life out of you, and that makes the energy and effort required to go out seem impossible to gather. Even if you do make it out with friends, you’ll spend most of the time in the bathroom wishing you were at the comforts of home. To make things even worse, spending all that energy and effort going out with friends will exacerbate your flare up—it’s a lose-lose situation.

People can be very judgmental. Luckily, the vast majority of people are very accommodating and supportive. However, the few people that decide to make mean remarks like, “You’re faking it”, or that, “You’re being a wimp” really hurt. Just because you can’t see it, doesn’t mean it’s not there. It’s hard being a young adult and having to use a handicap pass for parking so that you can even make it inside a store without dying, but then getting heckled and yelled at by people who think you are faking and abusing the system makes it exponentially worse. To have a professor in school think you don’t really have to use the restroom and that it’s not an emergency is very hurtful and painful—maybe if they could see what was happening on the inside it’d be a different story.

Your body gets beat up on the inside and it starts to show on the outside. It’s very common with many invisible illnesses to get symptoms that appear on the outside of your body, some symptoms include: Acne, cysts, hair loss, moon face, water retention, weight gain/loss, and etc., just to name a few. These unwanted symptoms will lower anyone’s self-esteem and make life that much more difficult.

You become very thankful for all the love and support you get from your friends, family, neighbors, and even random strangers. The smallest acts of kindness like someone just asking how your day is going or even someone telling you that you are looking good can make all the difference in your day. You become thankful for everyday and for the possibility of one day getting better. You realize how lucky you are to have doctors and nurses working around the clock to help you get healthier and back to normal. As you get better, you have the desire to help others who are struggling as you once were. You realize that even though living with invisible illnesses is excruciatingly hard, it has made you a stronger and better person.